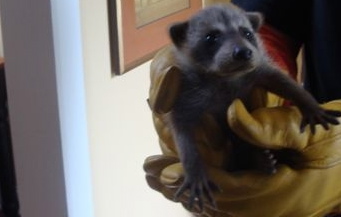 “Learn from the past, set vivid, detailed goals for the future, and live in the only moment of time over which you have any control: now.” Denis Waitley

Spring is in the air and that means we are rolling into baby season! As we all nestled in for the cold winter months, so did wildlife, seeking out safe and secure habitats. Throughout the winter months we received calls from homeowners throughout our service area, the Greater Hudson Valley, experiencing squirrels in their in attics and basements, raccoons in their crawl spaces, and skunks under porches to mate and build nests to deliver their babies during the spring months. The spring months offer an abundance of food for babies and plenty of time for them to grow strong before the cold months hit again. Raccoons, skunks, squirrels and woodchucks are all preparing to give birth over the next few months. Keep this in mind when considering whether or not to address a wildlife nuisance because what can begin as one or two pest animals can turn into an entire family of wildlife living in your home.

Raccoons’ gestation lasts approximately sixty-three days. They give birth to a litter of two to seven babies on average, typically in April and May. The babies or kits are born completely helpless. Their eyes and ears are closed. They do not open their eyes until they are around three weeks old and they are not weaned until they are between twelve to sixteen weeks old. At around ten weeks old, they begin to go out with their mother’s to forge for food. Many will remain with their mothers well into the fall and some into the winter.

Squirrels have a long mating season, typically ranging from February through May. Their gestation lasts approximately sixty days and they give birth to a litter of two to four squirrels. If there is an adequate food source, females can give birth to a second litter during the summer months. Unlike their fellow species, the rat, a female squirrel will choose the strongest male to mate with during the season, but will most likely not mate with that male again to avoid in-breeding. A baby squirrel weighs in at a mere ounce at birth and is about one inch long. They are born hairless and do not have teeth and are virtually blind for the first six to eight weeks of their lives. They typically remain with their mothers for eight to ten weeks. The breeding season for Flying Squirrels is from March to May, with gestational period lasting approximately forty days. They will have one litter per year of two to five young. The babies are weaned from their mother’s at about two months of age and are able to glide when they are three months old.

Skunks’ gestation lasts approximately sixty to seventy days, with usually one litter per year. A female skunk is capable of storing the male’s sperm to delay initiating pregnancy for several weeks. Very often a female nests in groundhog burrows or under porches of homes. Older females tend to give birth in early May. Younger females give birth in early June. They may give birth to anywhere between two to ten young or kittens. The kittens are born blind and hairless. They are able to open their eyes around three weeks of age. They are able to spray as young as eight days old.

Squirrels, raccoons and skunks do not hibernate, but the groundhog does. They begin to emerge in late February to early March and their breeding season begins. Their gestation lasts approximately thirty days and they give birth to two to nine pups in March and April. They only breed one time per year. When a baby groundhog is born, it too is blind, naked and helpless. It will not open its eyes until it is about four weeks old and will remain in the nest until it is about six to seven weeks old. Once they have ventured out of they nest, they begin to dig their own burrows within close proximity to its natal burrow. They will remain close to their birthplace for the first year before they go out on their own and establish their own series of burrows. The average groundhog digs over seven hundred pounds of dirt to create just one den and establishes between four to five burrows. Depending on the litter size, this presents and possibility of an intricate series of holes spanning across your yard in just a short period of time.

The baby season signifies the welcomed transition to spring, but it also signifies an increased risk of experiencing a human wildlife conflict. A human wildlife conflict brings with it the risk of damage to your property/investment, an increased risk of exposure to wildlife disease, and the disruption to your daily life from noises they create through vocalizations and movement. Female wildlife instinctually secure safe habitats to raise their young. If this happens to be your home, simply trapping and removing will not solve your problem. Once established, they will fight to maintain their territory. It is important to have exclusion materials applied to your home by a professional to ensure that squirrels and raccoons are not able to chew and tear their way back into your home. Properly monitoring and maintaining the wildlife invasion is key to successfully eliminating wildlife from your home.

If you are experiencing a nuisance wildlife issue, whether you need squirrel removal, raccoon removal, woodchuck removal, skunk removal, bat removal give Wildlife Busters® a call toll free at 855-945-1212 and we resolve your wildlife management issue professionally, efficiently and humanely. www.WildlifeBusters.com or www.TheBirdBusters.com

We are happy to share with you our Think Spring Savings! Enjoy a 10% discount on Site Inspections completed between February and March 31st. Let us know that you read it in our newsletter or like us on facebook and experience the Think Spring 10% discount! There are so many ways to save!

Squirrels are able to see behind them because of where their eyes are placed on their heads.

A squirrel can fall as far as 100 feet without physically injuring themselves.